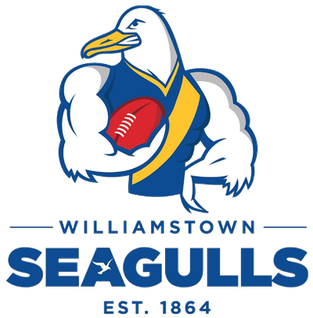 The Williamstown Football Club, nicknamed The Seagulls, is an Australian rules football club based in Melbourne. The club currently competes in the men's and women's Victorian Football League and VFLW competitions.

The Williamstown Football Club was formed in 1864, making it one of the oldest football clubs in Australia. The club was initially considered a junior club, before being granted senior status in 1884. Starting in 1884, the club competed in the Victorian Football Association. Williamstown's original colours were black and yellow.

The suburb of Williamstown was named after King William IV in 1837 and was often referred to as "the village" or "the fishing village" in nineteenth-century Melbourne; the club was thus known by the nickname "the Villagers" in its early years. In the late 1930s, Larry Floyd and Bill Dooley decided to adopt a more modern nickname, and the club became formally known as "the Seagulls". Throughout its history, the club has also been colloquially known by the abbreviated name '‘Town.

Williamstown won its first VFA premiership in 1907, and its second in 1921. Following three unsuccessful finals appearances between 1922 and 1924, the club was weak for the next fourteen seasons, winning just 77 of 255 matches and playing just one final – losing to Oakleigh in 1930. Owing to severe local employment problems during the Great Depression, the club was consistently short of money, despite a number of notable individual successes with several players winning Recorder Cups and VFA Medals.

As a result of skilful management by such officials as secretary Larry Floyd, president Bill Dooley and treasurer Jim McConville, plus the termination of contract agreements with the VFL, Williamstown recruited Harry Vallence, a star goal-kicker from Carlton, plus Gordon Ogden and Eric Glass from Melbourne for the 1939 season. Williamstown finished fourth on the ladder but, despite not having won a final since 1924 won three close finals for its third VFA premiership. The Seagulls continued their recruiting raid on the VFL, recruiting star players Ron Todd and Des Fothergill, and won the first post-war premiership in 1945.

Following the end of the throw-pass era in 1950, many Association clubs began to struggle through the following decade as the prestige of the VFA declined. However, Williamstown's strong support through the local community meant that it was still able to recruit a strong calibre of player; and, with the recruitment of former North Melbourne coach Wally Carter, who brought a VFL-level of professionalism to the team, the mid-to-late 1950s became the strongest era in the club's history. Under Carter, the club won three consecutive premierships in 1954, 1955 and 1956, and was unbeaten in the 1957 home-and-away season before losing two semi-finals and finishing third. Carter was replaced as coach in 1958 by club legend Gerry Callahan, who served as captain-coach until 1959, and premierships followed in 1958 and 1959, to give the club five flags in six years.

Despite playing in the lower division, the club remained one of the best-supported and most viable clubs in the VFA; and in 1982, when the divisional structure was modified such that the top division was selected primarily on off-field merits, Williamstown returned to Division 1 despite having finished only seventh out of ten teams the previous year.

Terry Wheeler was appointed captain-coach in 1984, and he and president Tony Hannebery were critical in gathering a strong group of players, including Barry Round and Tony Pastore, to make Williamstown one of the strongest clubs in the late 1980s. The club reached five grand finals between 1985 and 1990: it lost the 1985 decider by one goal to Sandringham, won the 1986 premiership against Coburg under Wheeler, lost consecutive Grand Finals against Coburg in 1988 and 1989, then defeated Springvale to win the 1990 premiership under captain-coach Barry Round. Despite this finals success, the club's best home-and-away finish in those six years was second, achieved only in 1989.

During the middle 1990s Williamstown slipped, and at its nadir in 1995, the club failed to win a game in either the firsts or seconds. At the end of the 1995 season, the club's survival was threatened when the Victorian State Football League sought to align the VFA (which at that time renamed the VFL) with the TAC Cup, and needed only one western suburban team to align with the Western Jets; as such, it ordered Williamstown to merge with Werribee. After the clubs could not agree to terms, the VSFL decided to grant the remaining licence and the affiliation with the Jets to Williamstown, resulting in Werribee's temporary expulsion from the VFL. (Werribee regained its licence a month later after threatening legal action).

The club was perennially competitive under both its affiliation with the Western Bulldogs and as a stand-alone team during the 2010s, and as of 2019 has not finished lower than fifth in the competition (after finals) since 2005, a period currently spanning thirteen preliminary final appearances in fourteen years. These sustained strong performances yielded three Grand Final appearances, for a premiership victory in 2015 and finishing second behind an unbeaten Port Melbourne in 2011 and behind the Richmond reserves in 2019. During this time, Williamstown also won the Foxtel Cup competition twice.

Since the 2018 season, the club has fielded a senior women's team in the VFL Women's competition.